National Media Development Center (NMDC) in coordination with FNJ Mahottari branch has successfully organized a five-day Journalism Training Focused on Development Reporting. Department of Information, Ministry of Information and Communications had supported the program. It was 99th journalism training organized by NMDC. Together with Mahottari, NMDC has organized its different trainings in 71 out of 75 districts of Nepal. The training was organized from 18-22 March 2017 (05 – 09 Chait 2073) at Mahottari distrist.

Journalism training focused on development reporting gave high priority to fresh participants. There were 24 participants including 13 women. There were only 5 working journalists and all others were new participants interested in journalism. At the end of the training, all of them expressed their interest to be a media reporter. There are 9 FM radio stations, two daily and seven weekly newspapers in the district.

The five days training was designed to the new as well as working journalists focusing on development reporting. NMDC focuses on development issues rather than that the reporters raise only in political issues.

The training became fruitful to all new participants as they clearly understood the theme of the training and they participated very actively in all sessions. For the first two days, the course covered the principles of basic journalism, news identification, news writing, experience sharing, field reporting and presentation together with the concept of  development reporting. In other days it focused on writing skill, interview skill, and other dimensions of development reporting.

The issues apart from principles covered in the sessions were new media-Facebook, Flicker, Blog, Google search, Google mapmaker, development and economic reporting and code of conduct for the journalists. Discussion also took place that the journalists had to be updated with district information.

Even in a short period of time, they had become able to recognize and identify issues and had also become able to categorize issues on different themes such as tourism, development and economy. They also have learned that journalists should keep in mind the code of ethics for journalists.

Chief District Officer Birendra Kumar Yadav inaugurating the five-day training said, “The training will encourage the participants to bring local development issues in the district. We from adm

inistration will support you to bring the issues public.” Senior journalists Hari Mandal and Ishwori  Poudel highlighted upon the importance of the training. “It is not necessary

to bring the leader’s speech daily if there is not any new and reliable information. Media should focus on economic development,”addressing the session trainer Pramod Pradhan said.

Vice-President of FNJ Nagendra Kumar had welcomed the participants. Bishnu Prasad Sharma, Executive Director of NMDC welcoming on behalf of organizer, Department of Information and FNJ had highlighted the content, objective of the five days training. At that time, he briefly informed the rural district focused training programs organized by NMDC. FNJ President Kamalesh Mandal had chaired the inaugural session.

Pramod Pradhan, Bishnu P Sharma, Mahesh Das and Mishrilal Yadav had facilitated the training.NMDC had evaluated the training through pre and post training questionnaires by involving trainees. The concept they mentioned in the firm had shown that the training was successful to transfer basic skill to the participants.  In five days there were 30 different sessions. 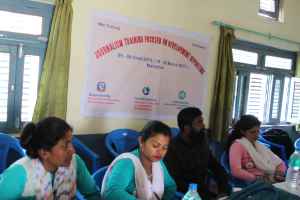 At the end, a brief closing session had also been organized in participation with senior journalists, FNJ members, local journalists. FNJ President had chaired the session. Senior journalists and trainers jointly distributed the certificates to the trainees. Rupesh Pandey and Puja Ray had expressed their training experience. Both of them said that the training had developed their confidence and encourage them to be a good journalists.

Achievements of the training: